What is Fire Extinguisher?

Fire extinguisher is available as both portable and movable apparatus which is used to put down fire directly into the substance that stops fire spread and cools down the material and depriving the oxygen flame. Usually the fire extinguishers are of small tanks contains compressed gas with hand pump to propel water via nozzle.

In case of fire emergency the thing most do is reading the instructions written on the fire extinguisher in order to figure out, can it be used to fight the fire. But knowing in advance and being able to distinguish the right fire extinguisher could save lives and assets immediately.

As Fire is in many forms, It is better to be familiarized on the type of fire, and what is the proper way to extinguish it rapidly.

Fire should be fought according to the materials involved in it, so it is classified into 5 types.

Every fire extinguisher is ergonomically designed for safe and effective dismissal of fire and its contents.  Each extinguisher has varied materials in it, which is suitable to fight certain types of fire. The appropriate Fire extinguisher must be used for the particular class of fire, or else it may ineffective to fight fire, and some cases may aggravate the fire.

The main 5 types of fire extinguishers are:

The type of Extinguishers can be easily identified by the color, hoses, and name.  It’s very easy to distinguish from one another.

Types of Fire Extinguishers and their Uses 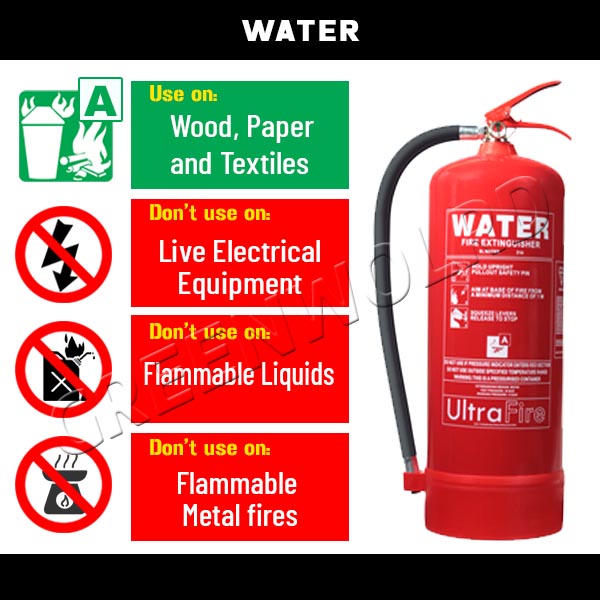 Water fire extinguisher is in solid red color and the word “water” will be printed in white colored text. This is a classic model that dispenses water at a high pressure to extinguish fire.

This is suitable for Class A fires:  i.e. extinguisher fights fire in coal, plastic, paper, cloth and materials related to these.

Water spray extinguisher will be solid red color and the word “aqua spray” will be printed in white color on it. This is more effective than traditional water model in firefighting, as they spray water over wide area with high pressure. Alike traditional counterpart they are apt only for class A fire.

NOTE: Never use this on burning oil / electrical appliances.

Both water spray and water consists of some chemical additives which enhances the effective of extinguisher up to 300%.

The chemicals have the capacity to remove the natural surface tension of water which soaks burning substances effectively.

Water mist extinguisher is a solid red one with words “water mist” printed in a white rectangle.

Water mist extinguisher is a unique type fire extinguisher that can extinguish all class of fires and also this can combat Class F fire, which is quite difficult to attack.

This sort of fire extinguishers has a special nozzle that converts the water to “dry” into small particles which are finally drawn into fire , cools it and suffocate, thus it extinguish the fire successfully.

This is an effective firefighting as it creates a safety barrier in between fire and user, as it repels the some of heat and leave behind no hard to clean residue.

NOTE: These are not classified as suitable for Class B (liquid) class C (gases).

ABC type fire extinguishers will be printed as “powder” over a blue color rectangle, below the rectangle it will be written as “ABC powder”. As the name says this has been created to extinguish Class – A, B, C fires which involves solid/liquid/ gas.

This powder is thermal blast which cools down the flames which stops burning.

As it is non- conductive in nature, it is suitable for extinguishing electrical fires but they cannot fully penetrate the spaces easily, thus the fire may re-ignite.

NOTE: ABC Fire Extinguisher should not be applied on class F fire like domestic chip.

The negative side of ABC powder extinguishers, it might cause inhalation problem when used in close space

This also leave residue which will be difficult to clean and it may cause damage to electronic appliances, carpets, furnishings etc.

These kinds of fire extinguishers are uniquely identified by its hose. They have the words printed “powder” in white text within a blue rectangle. But they should not be confused with ABC powder fire extinguisher, and they will indicate M28 or L2 below the rectangle.

The M28 and L2 are unique type of fire extinguishers which are created to tackle fire with D class fire, which has combustible materials in the form of powder or swarf. This has lithium, sodium, aluminum or magnesium.

Example: This extinguisher has low velocity application in order to make sure, that L2 or M28 powder is gently applied and effectively on burning materials to avoid swarf from spreading more.

When this form of fire extinguisher is sprayed first, it forms a crust and  insulates the metal thus it prevent access with other combustible substances and cools down fire by preventing oxygen to react again with metal.

L2 is apt for all sort of metal fires but M28 fire extinguisher cannot be used on lithium. (Simple trick to Remember: that L2 has L – “L” stands for Lithium.)

NOTE: Never use this on other class fire, mainly on electrical fires, also remember that water should not allowed to in contact with burning material. 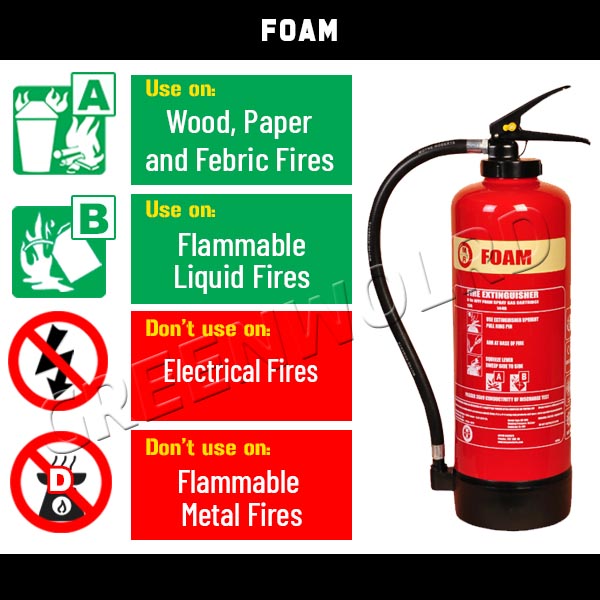 Foam fire extinguisher can be identified by seeing the word “Foam” printed over a cream rectangle in their body.

This is basically water based with foam content which has the quick flame knock- down as well as blanketing effect. It cools the fire and seals the vapors and stops re-ignition.

Foam Fire Extinguisher used for preventing class A and B fires.

When this is used against Class A fires, the user can just point and spray it, if it is used on Class B fires it should not be sprayed directly into flammable liquid. This may cause the fire to push and spread to its surroundings. It is recommended to spray the foam nearby which can build up and flow across it.

Foam Fire Extinguisher should not be used on

NOTE: Foam Fire Extinguisher should not be used on chip / fat pan fires. Also it is not suitable to be used in electrical fires, but when sprayed accidently it is less hazardous when compared to water.

CO2 Fire extinguisher is identified by “CO2” white color text printed on black rectangle.  This too has different type of hose.

Electrical fire and class B fires can be extinguished by carbon dioxide extinguishers; they smother the fire by displacing oxygen in air. As they don’t leave any things behind like other type of fire extinguishers, they are actually used for workshop/office/ places where electrical fire is possible which may reduce the damage happen to equipment.

NOTE: CO2 Fire Extinguisher should not be used for F class fire. The strong jet from the extinguisher will thrust burning fat from the fryer and make the fire spread to its surrounding place.  Remember that once carbon dioxide smothers the fire and if the gas has been floated away, the fire might re-ignite if the source of fire is not isolated.

Only carbon dioxide with frost- free horns on hose should be used. Or else the hand holding the horn might become frozen as the gas becomes colder when it discharges

Wet Chemical Fire Extinguisher can be identified by the words printed across a yellow rectangle as “wet chemical”, also it has an extended applicator. 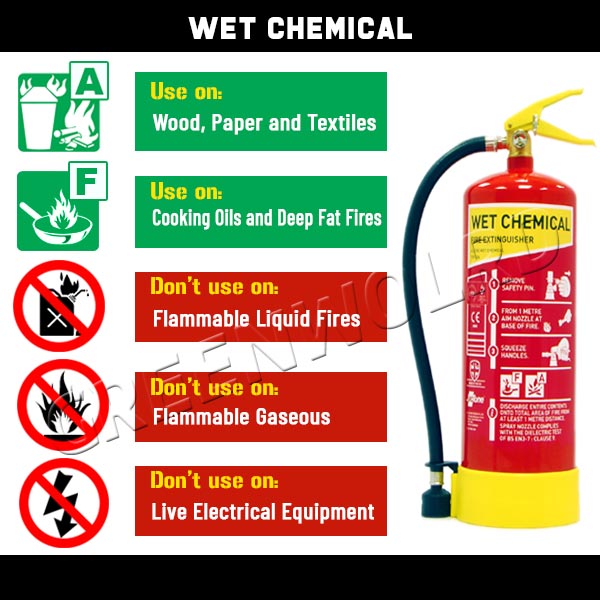 This has been created for extinguishing Class F fire; they are much effective as they are able to dissipate fires which is of high temperature: like fats and cooking oil etc.

The chemicals mixed in the canister dispels the fire, cools down the burning material, and form as soap solution which seals the burning surface and evicts re- ignition of fire.

They do discharge a high effective, gentle spray like L2 and M28 powder extinguishers to prevent burning oil/ fat from splashing on the user or spreading on surroundings.

The effective way is to spray it in slow circular motion. Individuals are supposed to clear the whole content onto the burning oil or fat, or else the fire may re- ignite.

NOTE: This type is not suitable for class B fires (which includes liquid) and can combat class A fires, but it is not as effective as other fire extinguishers. 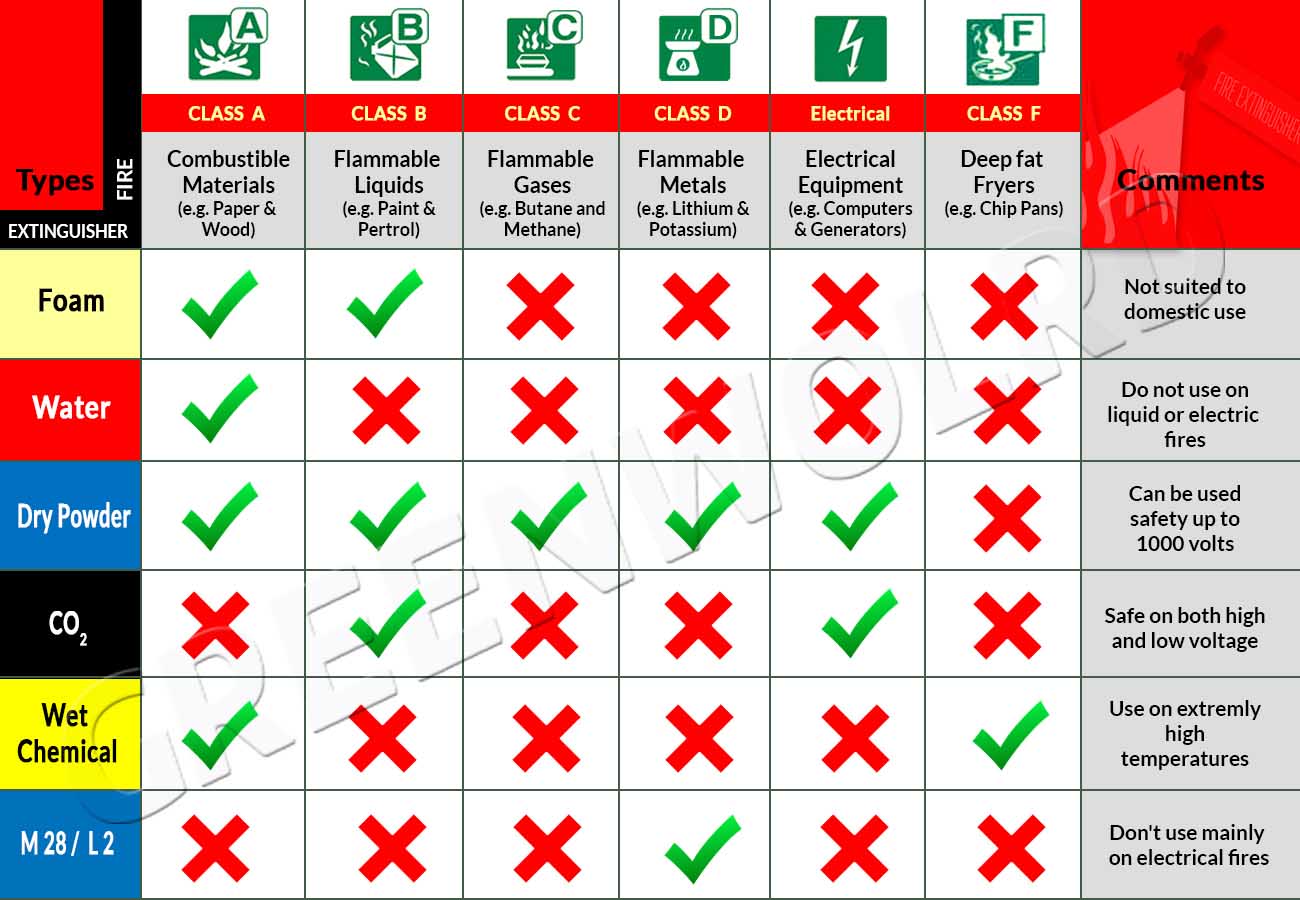 OTHER FIRE EXTINGUISHER TYPES AND USES

Fire extinguishers can be also obtained with stainless steel/polished aluminum/ silver finish. Those sorts of fire extinguishers are suitable for place with good hygiene, has a risk of corrosion, or pleasing interior etc.
If you are acquiring fire extinguisher in your place, always ensure to check manufacturer’s instruction for suitability and use.

Our Fire and Safety Course Locations

How to Change the Failure to Success in NEBOSH Exam

How IOSH Managing Safely can Transform your Life